In 1827 the Free Hanseatic City of Bremen founded the port of “Bremer Haven” on the North Sea estuary of the river Weser. The two towns formed the state of Bremen. The young port of Bremerhaven owes its rise to become a world-famous overseas port  to the 7 million emigrants who left Europe from Bremerhaven between 1832 and 1974.

Over 90 percent of emigrants from Bremerhaven were bound for the Untied States of America. The transatlantic crossing between Bremerhaven and New York became the most traveled ocean highway in the world. At one time Bremerhaven was the largest European port of emigration.

In the 20th century the emigration business in Bremerhaven gradually declined in significance. North American restrictions on emigration and, from the end of the 1950s, the alternative of doing the journey by air, led to the end of emigration via Bremerhaven.  In 1974 the last emigration ship departed from Bremerhaven. 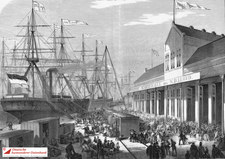 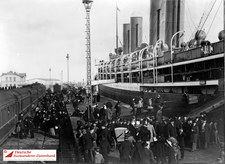