At the end of the 1820s a lack of export products caused a real ebb in trade in Bremen. Merchants in the city therefore became increasingly interested in attracting a larger of share the European emigration business. The founding of Bremerhaven in 1827 was the most important prerequisite for the success of this project, as this new port on the estuary of the Weser could be used by large ships all year round.

The port of “Bremer Haven” was opened on the Weser estuary in 1830, but it did not start to flourish until the city was systematically settled and transport to and from the port improved. The real economic breakthrough, however, came with the boom in emigration business.

In 1832, in order to secure competitive advantages, Bremen passed the first law to regulate the sea passage of emigrants. The Bremen regulations were more favourable for emigrants than at other ports. Up until 1944 around 10,000 emigrants per year embarked on their journey overseas in Bremerhaven. 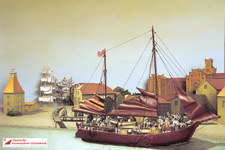 Arrival of emigrants in Bremerhaven 1850 (Diorama)