Emigration via Bremerhaven took on a new dimension when “Norddeutscher Lloyd Bremen” (North German Lloyd) was founded on 20th February 1857 by the Bremen merchant Hermann Heinrich Meier. Norddeutscher Lloyd grew to become one of the largest and most successful shipping companies in the world.

From the very outset Norddeutscher Lloyd used only steamships for overseas transport and promoted emigration through advertising campaigns in several European countries. In 1863 a scheduled service was set up between Bremerhaven and New York. At the end of the 1860s Norddeutscher Lloyd had already earned its position as the leading shipping company in Bremen.

The company’s head office remained in Bremen, but the passenger ships were all cleared in Bremerhaven. Bremerhaven became know as “Lloyds town”, and at times around half the population were dependent for their work on Norddeutscher Lloyd. Generations of Bremerhaveners worked in the agency, in the clearance halls, on the technical staff or as a member of the crew on the Lloyd ships. 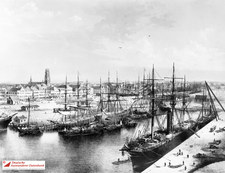 Emigrant ship at the quay 1910