The Hanseatic city of Bremen, to which the ports in Bremerhaven belonged, promoted the emigration business by running advertising campaigns in Germany and abroad and by organizing emigration transport. The emigration business was an important element in Bremen’s economy and the city did everything it could to make sure it did not miss out on any business opportunity.

In 1840 the Senate of Bremen passed a resolution stating that any merchants or businessmen who made a profit out of emigration must be resident in the city. In justification it was claimed that the city had to make sure that “the colony of Bremerhaven did not come to own a line of business that by rights belonged to Bremen”.

The emigration business created a tense relationship between Bremen and Bremerhaven. Bremen even insisted in having “Bremen” entered on the passenger manifests as the port of departure even though the ships left from Bremerhaven. But despite these administrative restrictions and disadvantages, Bremerhaven also profited from the many waves of emigration in the 19th century. 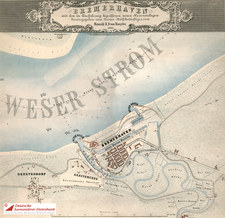