The end of emigration

Immediately after the Second World War (1939-1945) it was mainly “Displaced Persons” who emigrated via Bremerhaven. These included former forced laborers, refugees from Eastern Europe and prisoners from the concentration camps. The relaxation of the emigration restrictions in 1948 also meant that more Germans could emigrate.

In the 1960s the Bremerhaven emigration business saw a continual decline in the number of passengers, as the increase in air traffic slowly brought about the end of passenger shipping. A journey from Europe to America by air could be done in one day, which also meant that it was easier to return to the old home country.

On May 17, 1974 at Bremerhaven’s Columbus Quay emigrants went on board the Greek passenger ship “BRITANIS” bound for Australia. No one realized at the time that this was the last time emigrants would leave Germany from Bremerhaven. Bremerhaven had finally lost its importance as a port of emigration. 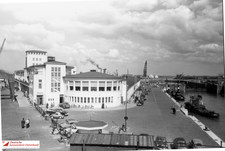 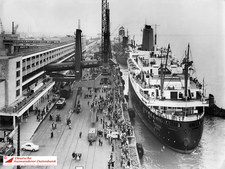