In 1897 new docks and a new passenger clearance hall were opened in Bremerhaven. At the same time there was a marked increase in the number of emigrants from Eastern Europe. Bremerhaven grew to become the biggest port of emigration in Europe with more than 200,000 emigrants leaving Europe from the port every year.

Norddeutscher (North German) Lloyd Bremen played a major role during the heydays of the emigration business between 1897 und 1914. Thanks to the increase in emigration and tourist traffic, the Bremen-based shipping company, which carried out all its business operations in Bremerhaven, became the largest shipping company in the world. Lloyd’s famous four-stacker steamships set new standards in passenger shipping.

Bremerhaven boasted the most up-to-date port technology  as well as the biggest locks and docks in the world. Faith in the progress and continuation of overseas shipping knew no bounds. But the beginning of the First World War (1914-1918) put an end to this Golden Age. 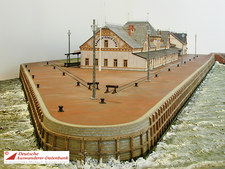