At the beginning of the “Third Reich” in 1933 the first “race laws” were passed, increasing the pressure on the Jewish population to emigrate. Emigrants were now refugees who were trying to escape arrest or undignified living conditions. Bremerhaven became a refugee port for people persecuted under the National Socialist regime.

However, emigration during the “Third Reich” was complicated by high taxes and bureaucratic obstacles. Norddeutscher Lloyd tried to counter the declining number of emigrants through intensive advertising campaigns. Many Jewish emigrants, however, preferred to travel with foreign shipping lines since Jews were given unequal treatment on ships operated by Norddeutscher Lloyd.

Soon after the outbreak of war in 1939 it became impossible to emigrate from Bremerhaven which had been declared a port of war. Until emigration was completely forbidden on October 23, 1941 Jews wishing to emigrate had to use other European ports. 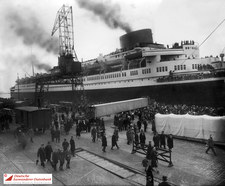