The aim of the German Emigrants Database is to record all the passenger manifests for emigrants who emigrated to the United States of America primarily from German ports between 1820 and 1939.

At the moment passenger manifests for the following periods have been recorded:

Please note that there may still be some gaps in these dates, i.e. the data for some emigrant ships have not yet been entered in the database, partly because the lists for these ships have been lost.

Research into people who are not in the database will be possible at a later date.

Digital recording of the passenger manifests is an ongoing process. Since the German Emigrants Database is not being financed out of public funds, we are very dependent on donations. 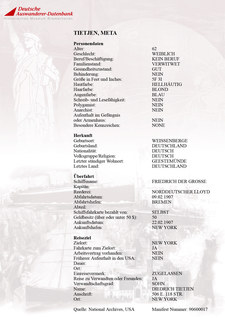