The wooden barque “COLUMBIA” was built in Geestemünde (now part of Bremerhaven) in 1862 at the Johann C. Tecklenborg shipyard. Under the flag of the Bremen shipping company and overseas trade D. H. Wätjen & Co., she sailed in the freight and emigrant voyage. 156 emigrants could be accommodated in the intermediate deck. In the aft deck structure there was space for 70 passengers in the second class and 4 passengers in the first class. On the return voyage from America, the “COLUMBIA” transported freight.

Although more and more steamers were used in the 1860s, many emigrants preferred the grueling but cheaper passage with a sailing ship. The barque “COLUMBIA” was one of the last large sailing ships on the emigrant voyage. For the transport of emigrants, the cargo holds were divided into crates and equipped with bed frames. The transport of emigrants to the USA offered the shipowners a lucrative alternative to useless ballast that otherwise had to be loaded for the outward journey. 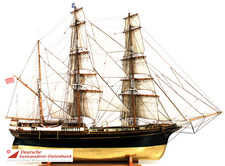 Model of the “COLUMBIA”