When it was launched on May 4, 1897, the “KAISER WILHELM DER GROSSE” was the largest ship in the world. Six months later, the ship won the “Blue Ribbon” for the fastest Atlantic crossing. The four-chimney steamer was a mixture of a luxury ship for wealthy tourists and a means of transport for emigrants. In the winter of 1913/14 it was completely converted into an emigration ship.

The first and second class cabins were almost all on the upper deck of the “KAISER WILHELM DER GROSSE”. The tween deck passengers slept in dormitories. There were two bunks on top of each other. The upper and lower berths were about 1.80 meters long and around 50 centimeters wide. The food was eaten in special dining rooms for tween deck passengers. 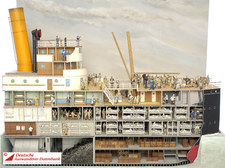